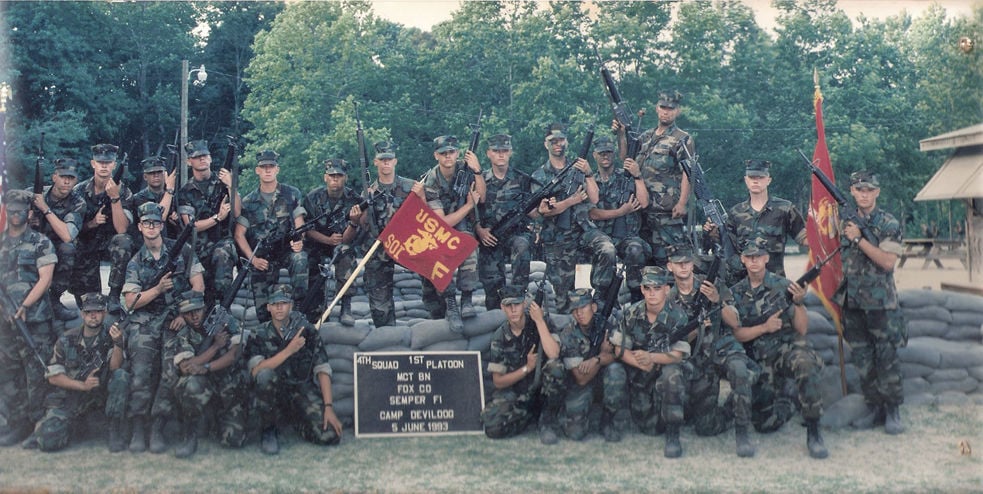 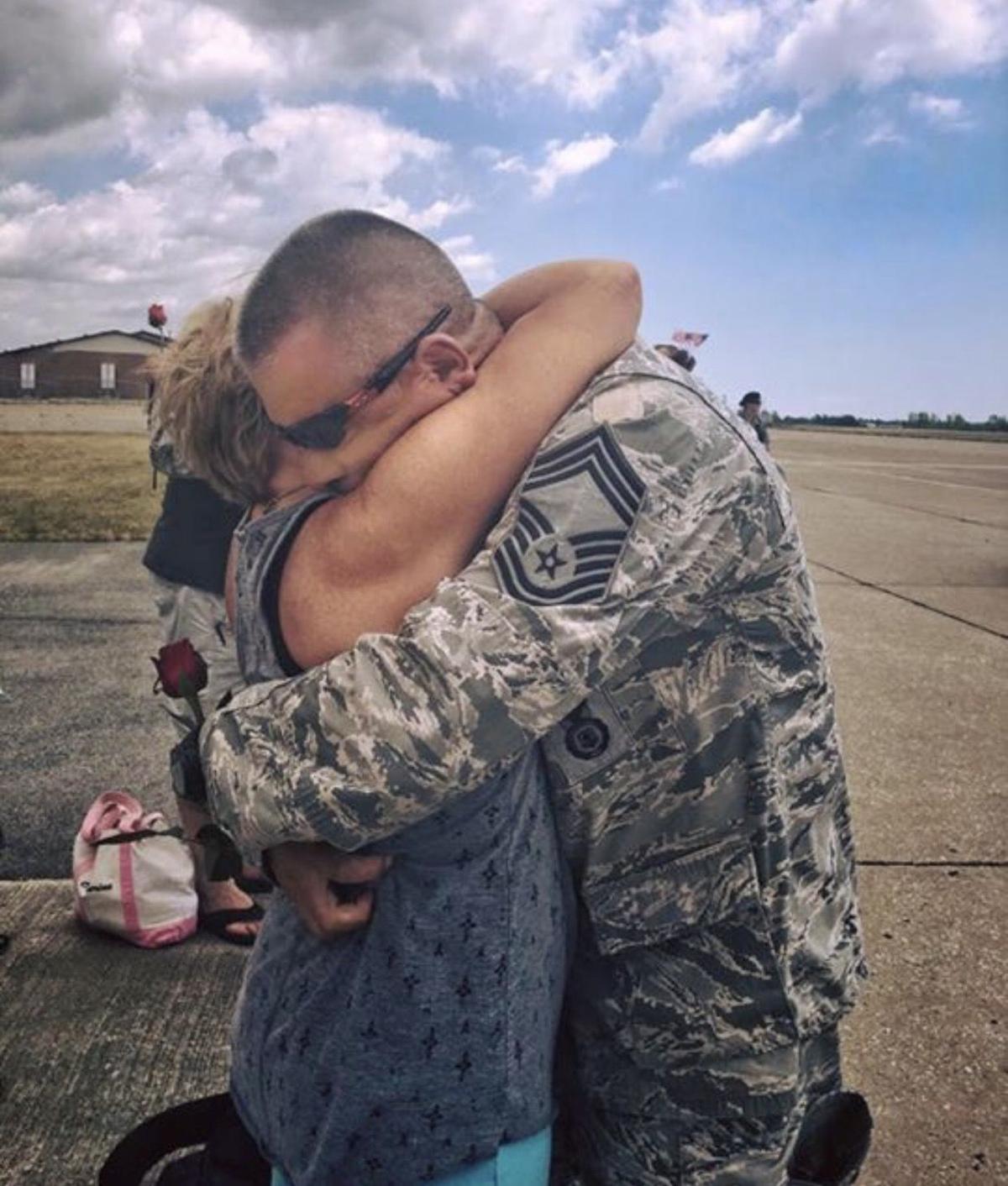 Robb Morse hugs his wife, Kaysi, upon his return from Kuwait in August 2016. He now works as a deputy sheriff with Ontario County.

They come from all backgrounds, cultures and hometowns, each seeking something a little different. Their paths are perhaps guided by a sense of purpose, a family tradition or a thirst for adventure.

Few organizations compare, from a service standpoint, to the branches of the U.S. military. And while those who enlist in each come from different walks of life, they quickly develop shared experiences through a disciplined regimen, basic training and a sense of camaraderie with which few other professions can compete.

It’s for these same reasons that a fluid respect exists through all branches of the military, and why many veterans do not share much about their experiences.

“I think all service men and women are very humble about their service and don’t like to speak of it because they feel as though, ‘why should I be telling my story versus someone else who gave a lot more than I did?’” says Ray Shedrick, a Marine Corps veteran.

Speaking of their experience in the military is one obstacle — walking away from it to begin with is another. And sometimes the hardest uniforms to take off are the ones they never envisioned putting on.

Four U.S. military veterans from Ontario County spoke about their experiences, how the service helped shape who they are today, and why they wouldn’t trade it for anything.

At 17 years old, Ray Shedrick received a five-page letter from his estranged father listing all the reasons he shouldn’t enlist in the military. Shedrick’s father was a Vietnam War veteran who struggled with drug and alcohol abuse after returning home, and left his family when Ray was young.

“It was pretty detailed why I shouldn’t do it,” Shedrick says about the letter. “But at that point, I already had my mind set on it, and I didn’t exactly hold my father’s opinion in high regard, so I still went ahead and enlisted.”

At that age, Shedrick says he was a “problem child” in school. He lacked discipline, positive male role models and respect for both himself and others. After joining the Marines, though, he eventually moved up the ranks to become the battalion ammunitions and ordinance chief for a Marine Corps tank battalion — a significant responsibility.

But after his tenure, Shedrick struggled readjusting to civilian life. In the Marine Corps, he had a highly respected role and a great deal of respect for senior officers as well as his subordinates. Shedrick says they also shared the same pride in their duties, and being a member of the Marines went far beyond any paycheck. But in his first role out of the Marines, his job cleaning cars at a dealership left him unfulfilled.

In 2003, he was ready to reenlist in active duty, but his wife convinced him to go to college. Because of his difficulties in high school, Shedrick was reluctant, but with his wife’s support and what he learned in the Marines, he was able to excel. He earned a master’s degree in history, and during his graduate school work studied post-traumatic stress disorder in combat veterans in all military fields and U.S. wars, debunking the notion that PTSD didn’t exist before Vietnam.

Now, as a probation officer in Ontario County, Shedrick is able to assist many veterans who are on probation, several of who are struggling with physical and mental challenges as a result of combat.

“My time in the Marine Corps really helps me to communicate with a lot of them and at least understand what they’re going through,” Shedrick says. “I think this job gives me the opportunity to help someone that, say, if someone did the same for my father, then maybe at some point I could’ve had a better relationship with him growing up. I think this has provided me with an opportunity to really help veterans.”

Herendeen was 24 years old and had just earned an associate’s degree in business administration; however, had no desire to pursue anything in business. So, he looked to the military to continue his family’s legacy.

After enlisting in the Army, Herendeen quickly gained a sense of motivation and pride. He also credits the camaraderie he felt with other soldiers for quickly influencing his purpose. It’s that same mentality that served him well when he faced combat in Iraq in 2005, an experience he shares with other reserve soldiers who are young and going through training.

“It completely turns your world upside down,” Herendeen says of facing combat. “But you do it for the men and women to your left and right. You’re not there any longer because the Army told you that you have to do this or that, you’re there for your brothers and sisters. And you get used to it, as funny as it sounds. It just becomes part of your life when you hear incoming motors and you hear outgoing rounds. You’re there long enough that you can distinguish the sounds, and you know how far away it is.”

Herendeen struggled to readjust to civilian life upon returning to the States. To cope, he took an interest in woodworking and even restored an old acoustic guitar. It was after joining the Ontario County Sheriff’s Office, though, that everything clicked, he says. He was able to apply several of the same values and principles he learned in the Army to his work with the sheriff’s office.

“The Army definitely instilled that in all of our soldiers, but I definitely brought that with me,” he says.

“I’ve been doing it now for 14 years,” he says. “I love it. I think it’s one of the best decisions I ever made and I’ve made the best friends in my entire life there. I’ve learned a lot. I think it’s a great place to go.”

Currently in the reserves

Years ago, Robb Morse was on a Boy Scout outing to an Air Force base when he saw a B-52 take off.

“I just thought that was the most awesome thing in the world to see,” Morse says. “Even now, I’m still in awe that we can get something that big into the air.”

That enthusiasm never left Morse. He eventually enlisted in the Air Force as a security specialist, and later served with the security police. When he got out of active duty, he almost immediately joined the reserves.

Morse has been deployed several times since 9/11, including tours in Uzbekistan, Afghanistan, Pakistan, Iraq and Kuwait.

“It changes you,” Morse says of combat. “You find that things bother you more when you come home, and not because you don’t have a good support system at home, but it’s weird how even a smell can trigger things. Right now if I was to smell an oil fire or tires burning or something like that, it would probably bring me back to Iraq and Kuwait.”

His No. 1 support system, he says, is his wife. Morse also spends time at the gym, because part of the issue that many soldiers face is lacking an outlet for pent-up energy. If you don’t have an outlet, it can create distress down the road, he says.

“You’re amped up to a level that you are telling yourself in your mind that you are going to go home, and when you train like that for every mission and you go out and you do your mission, but you don’t expel that energy. If you don’t have an outlet for that, then it just sits there and brews,” Morse says. “I think a lot of people deal with it by having energy issues and thinking, 'I have this, but I don’t have an outlet.'”

It’s a message that Morse voices to young recruits, and while he speaks highly of the military, he also wants to ensure that young recruits are enlisting for the right reasons.

“Be sure that you’re physically and mentally sound to be away from your family, go through some rigorous training and know the job you want to do before you just blindly enlist or get commissioned to a job that may not be for you,” he says.

Sue Dragos is from the small town of Penn Yan, New York. She enlisted in the Army, a career path she hadn’t envisioned before, after a fateful visit with her cousin.

As a senior in high school, Dragos was debating which college to attend. Then, one day, a military recruiter was at her cousin’s while she was visiting.

“I really wasn’t even in on that conversation,” she says. “I just knew he was there talking to him. For some reason I thought, ‘that may be a good idea, and that may be interesting.”

“It got me my education. I got to travel to places and have experiences that I wouldn’t have had, and meet people that I wouldn’t have met,” says Dragos, who went on to specialize in finance in the Army. “It changed my view on the world. You grow up in a small town, and that’s your world. If you don’t leave there and don’t travel, that ends up being your world.”

That experience also helped Dragos realize how fortunate people are to be living in the United States, enjoying the freedoms they do.

“It’s an eye-opener, and I just think every young person could benefit by serving time in the military,” she says.

Dragos says the biggest mental challenge for her was leaving home at 18 and traveling out of the country. “You have to get your mind in a place where your mind is sometimes not used to being,” she says.

She credits her family for helping her through the experience, something for which she’s deeply grateful.

“For me, it was life-changing,” she says. “It got me away from my hometown, and it exposed me to a lot of different experiences that I never would have had if I hadn’t have gone into the military.”